June is a happening month for me as i was rekt again, total of 3 times since March, May and June, the latest was iron finance. i thought that i can outrun the bank run, instead, i got outrun. On the bright side, it was small amount that i got rekt, good reminder lesson for me -> If it’s too good to be true, then it certainly is.

This time around, finalize the asset allocations and include the traditional portion to have a more holistic strategy that caters to the 50/50 strategy. The active and passive part is 50/50% each, and further breakdown into traditional and cryptos, the percentage is 25/25%. This should be the final form of the portfolio going into the rest of 2021 and beyond.

Removed SAFEX, RUNE and ZIG for HODL and staking, consolidating the HODL to have a more concentrated portfolio.

New entrants are GOMT and TRU, GOMT is gomeat serives which they are addressing the halal and kosher market. The team already has a revenue-generating business since 2019 and the team is pretty solid, decided to take a leap of faith in the ICO, its my first ICO since 2 years ago and pretty excited about them. You can read more of them at this link.

TRU is a business that targets loan origination for commercial business, and I used to work in loan origination entity and like the TRU model but the tokenomics are a bit weak at the moment but there are proposals to change it.

QTF value dropped a lot since the token release in Bitfinex, i guess it due to folks are moving to much higher yield assets in DEFI space but no doubt Quantfury is a solid entity and just released the web version for trading.

LOC is still as solid as ever, with GOMT joining the HYDRA system and that will add on the network value. The issues i have with HYDRA is the tx value is still expensive than BSC and MATIC, and the TPS is 540. Well, let’s see.

CAS has a partnership to be announced on 22 July and i know who that partner is, a bit disappointed at how the AMA is run and how weak the Cashaa dev team is. Since they are hyping abt this so-called big partnership, hope to sell some of the holdings off to fund for TRU and GOMT.

Nothing has changed except took out RUNE, and ZIG, and added TRU.

Got into AAVE late, nevertheless, will move assets over to hyper-compound Matic, invest in Balancer pool, and a small amount for FISH.

Will funnel extra moolah from staking to AAVE and from there hyper-compound Matic, invest, stake accordingly, see following funnel map. 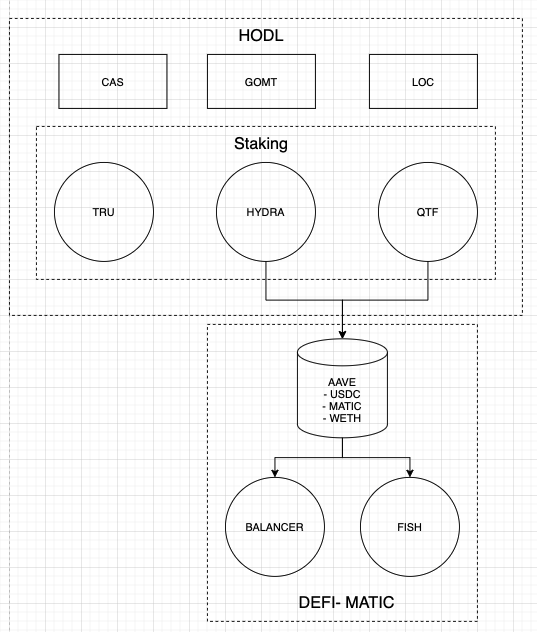